On this day in 2001, Tony Sanchez announced his candidacy for governor.  He went on to spend millions of dollars of his own money to fund his campaign.  The end result was not good. 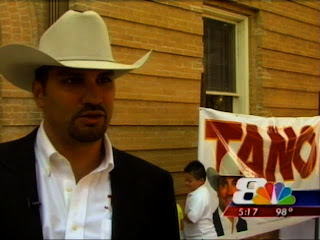 And in city council news, Councilman Carlos San Miguel of pool fame presented an idea to city staff about constructing a "doggie" park in his district to accommodate our four-legged friends and their masters.  He made mention that it's not expensive to build the park amenity.  But with budget deficits being so common at city hall the last several years, a colleague had to remind him that money is tight.

Good for Councilman Roque Vela Jr. for expounding on the virtues of fiscal restraint.  But he then went on to talk about building a park in his district along Bartlett Ave.  Oh well.