My blog's sixth birthday is in two days, and I want to take this opportunity to thank some people who have contributed their expertise to making this site a little better.

First up has to be my buddy Juan.  This man and I go back some 35 years.  It was great to have him support me from the beginning.  Not only did he direct me to blog providers like Blogger, but he showed me how to add links to my posts, something trivial to him, but enlightening and useful for me.  Originally he suggested I try My Space, or Facebook as a blogging platform, but for some reason, those sites didn't interest me then.  I was determined to have my website have its own identity and separate location from those popular outlets.

He went on to contribute posts for LaSanbe, as did some other people I know.  Past blog contributors include:  Single X, Not My Rodeo, and Piper Maru.  I realized that blogging would be a hobby for me.  I was never going to reach the heights that popular bloggers reached.  However, I did want to maintain some consistency for readers, and the help that my contributors lent really took some of the pressure off. 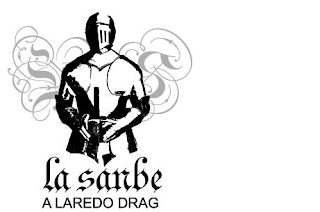 Next I gotta send props to my friend Alex who came up with the first ever LaSanbe logo (pictured on left).  I gave him the idea of including the suit of armor in the logo because it's an image I've always associated with San Bernardo Ave.:  vendors selling those gawdy things.  The faint scribbling behind the soldier is an "L" and an "S" for to (inside joke) accentuate the design with a nod to the blog's name.  I think I added the tagline at the bottom, not one of my best ideas.

Next came a masthead.  The street sign motif was created by Daniel Castro of San Antonio.  I liked what he did for the Bordertown Blues blog, and so asked for his help with mine.  His design has been the most popular among some of my readers.

The LaSanbe bus masthead, which is about a year old or so, was created by local artist Gil Rocha.  The art he has displayed outside his studio inspired me to seek his input.

And hey!, how 'bout the Sanbe t-shirt?  Definitely a collector's item.  Only about a dozen were made back around 2009. 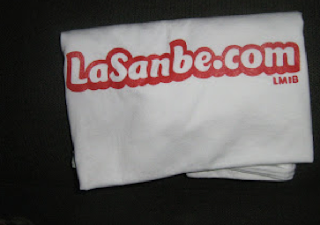 Design and printing done by Mr. Aldaco.  His shop is somewhere along Lyon St.

Since 2007 I've amassed 489 videos on my YouTube channel.  Not spectacular by most blogging standards, but noteworthy nonetheless.  Which brings me to some of my video capture.  This technique I've had to learn on my own, which probably explains the shoddy production sometimes.  Thanks to the use of a DVR, and a cable that connects the digital recorder to my computer, I can practically capture any footage I need.  With it I can also capture still shots of anything that appears on t.v.

I use the El Gato software for video capture.  I can use the program to transfer footage from my DVR, VCR, DVD player, etc.  It's a very handy tool for a lot of applications.

It's been more than a year since I've done an audio podcast.  Audio podcasts don't take as long to upload like videos do, but the process can be somewhat tedious.  All I would do was record my voice directly into my desktop using Garage Band.  From there the key step was to convert the audio clip into an MP3 file, then upload it to the podcasting host of your choice.

I think that's LaSanbe in a nutshell.  I'll be happy to answer any questions you may have.  Keyrose, out.