Are We All That?

El Mañana newspaper recently published a story about how McAllen's export totals closed the gap with Laredo.  Naturally, valley media outlets also featured the historic bit of information.  And McAllen was proud of this achievement as well. 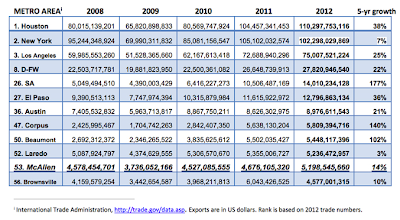 So what do our city representatives do?  They get all upset and come to the city's defense, as if anybody asked them to do so. 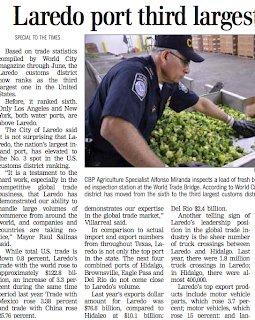 But that doesn't stop the city from making up its own story and sending it in to the local newspaper.

I don't dispute that the port of Laredo is a key area that racks up large trade numbers.  I just don't understand, again, where the city gets their information.  In the clipping post above, they state that their export total is $76 billion.  Meanwhile, the Commerce Department puts it more around the $5.2 billion range.  So who is right?

And they also ranked Laredo as the 50th export market two years ago.  That's different from 'customs district' but what I'm concerned with is how Laredo ranks itself against other cities.

Laredo may be a great trade hub, but city officials have really thin skin.  Don't mention McAllen because they'll just blow their top.