Going All Matamoros On Your Ass

For 88 years, St. Peter’s Memorial School Raiders have been a major part of the Laredo community.  However, raiders are pirates and an image many at this Catholic elementary and middle school felt was not appropriate for the students to portray.
After a year-long process of research and design, today the school unveiled their new mascot:  the St. Peter's Memorial School Crusaders.
Information courtesy of the Laredo Public Information Officer who really has no business passing this around.
Appropriately enough, the school is located on Matamoros.  In 2008, a local teacher proposed changing the name of the street because it translated into killing of Moors.  It was clarified that the name Matamoros was derived from a Mexican war hero.  Okay, so there's that.  But is it really a good thing to choose the name crusaders when the U.S. is on the verge of attacking Syria? 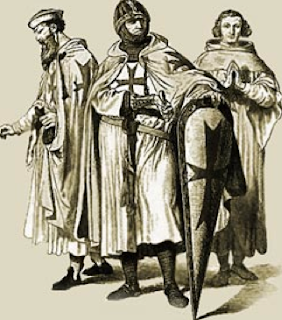 Since 9/11, many Americans adopted a negative view of all Muslims; Nevermind that they didn't know what they were talking about.
Now I question whether St. Peters officials know what they have done in changing the mascot's name from the supposedly unacceptable Raiders to Crusaders.
Laredoan's won't probably give this issue a second thought.  And school officials will be damned if they're going to change the name to something else.  But I can guess that one person now thinks he was bamboozled five years ago when he was told that Matamoros meant something totally different.
Posted by KeyRose at 4:38 PM