The Texas senate put on a good show the other night as democrats fought the GOP's efforts of trying to pass a restrictive abortion bill.  But a vote also occurred at the U.S. House recently that sought to limit the time a woman can have an abortion.  In some cases, a woman wouldn't be allowed to have the procedure after 20 weeks.  And Henry Cuellar said okay.  It would be interesting to know if he'll be asked about it at the town hall meeting he has scheduled this Saturday morning in Bruni, TX.

After SB5 died in our state senate, Filibustering Wendy Davis became a political star.  Leticia Van de Putte also got some acclaim for a statement she made during the senate fight:  "At what point must a female senator raise her hand or her voice to be recognized over the male colleagues in the room?" 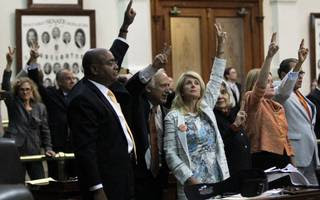 I thought it was fitting to see women fighting for women's rights.  We'll see if Davis and Van de Putte take center stage again next week since Governor Rick Perry called for another special session to start Monday, July 1st.  Back in the 956 hinterlands, we have the locals trying to make sense of abortion law.  I give you Louis Bruni.


We get the politicians we deserve.
Posted by KeyRose at 7:37 AM