I hadn't done a photographical (is that a word?) post in a while, but a certain bumper sticker provided some inspiration this weekend.
Along San Dario Ave. and Calton I noticed a peculiar sticker on a truck's tailgate.  It was of an Autobot.  For those unfamiliar with the Transformers franchise, the Autobots are the good (robot) guys who battle the evil Decepticons.  Enough background.  The sci-fi logo was altered, in this case with a religious bend.

Unfortunately this is as much as I can zoom in for the shot, but the caption beneath the mask says transformate, and a cross is embedded in the logo's brow.  A reference to Scripture is included as well.

Here's an English version of the sticker.  It references Romans 12:2. 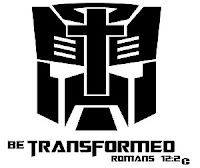 2 Do not conform1 any longer to the pattern of this world,2 but be transformed by the renewing of your mind.3 Then you will be able to test and approve what God's will is4--his good, pleasing5 and perfect will.

I don't recall if this same quote was used on the truck sticker above, but the revised logo speaks volumes of the culture in Laredo.

Not everyone speaks Spanish in Laredo, especially the younger generation, but the message is pretty clear.  The biblical reference is enough to get the point across, that is, if people have trouble understanding what transformate means.  In the Gateway City moreso, you'd expect to see things translated into Spanish.  That's not necessarily a bad thing, even though the locals would be quick to frown on the practice.

The sticker is a good example of many cultures colliding.  You have the Spanish influence.  There's the religious on top of the pop culture reference.  There's a call to rejoin the faith while taking liberties with copyrighted images.  The capper has to be, in my opinion, the spiritual melding with fantasy.  Can we at least acknowledge the irony in that?

In no way do I mean to mock the sticker's message, or its significance as it relates to our culture.  But it's not a trivial little piece of propaganda if you really think about it.