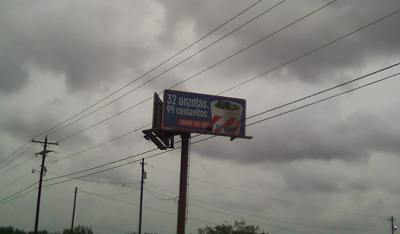 A billboard along Zapata Hwy is calling motorists to stop in at any Stripes Store to pick up a 32 oz. soft drink for a buck.  As you see with many a roadside ad in Laredo and south Texas, the text included will also be shown in Spanish.  It's a common occurrence, one that we've probably learned to ignore.

I highlight this ad because we've taken offense, at one point in our lives, to the tactics used by corporations that cater to Mexican nationals.  We cringe when clerks address us in Spanish.  We lament the ubiquity of music with Spanish lyrics.  Gawd forbid someone should wave a Mexican flag around here; that'll send us into a tailspin.  Any type of sentiment that's directed towards the Hispanic culture we meet with disdain.

I don't know why that is since we grew up going back and forth between English and Spanish with our friends and family.  We spent our leisure time in Laredo and Nuevo Laredo.  In my case, Tejano music, or polkas were never my cup of tea, but I was always there on the dance floor when Juana la Cubana was played during wedding receptions.  Yet, for some reason, people relate to me that Laredo has turned into 'Little Mexico,' or use the mocking refrain, "Con la pansa aqui, pero el corazon en Mexico" when talking about someone showing Mexican pride.

I wanted to write about this because we support the likes of Sebastian delaCruz for singing the National Anthem but we chastise the culture he represents in wearing a charro costume.  The little boy got a lot of heat on Twitter for his performance.  People jumped on those making nasty comments towards him, labeling them racists.  I'm not saying we're racists, but I do wonder when it was that we became pussies.  When did we become so sensitive to Mexican culture when it's been so much a part of our lives?
Posted by KeyRose at 1:35 PM