I Can Think Clearly Now

The last post I put up was on Tuesday night.  Finally got around to this one after a brief viral illness.  It felt like I had the flu but it was probably just the effects of some serious sinus congestion.  I won't bore you with the phlegmy details.

Today Juan Narvaez was going to sell off all his 8-liner machines from his South Zapata Hwy location.  I think he's going to try something else.

Also today was the big mud run at the North Central Park.  My better half commented that Charlie San Miguel must have a PR person because this time around a trophy is being handed out in honor of Marcos Aranda, the firefighter who recently died of Cancer.  Good way to shift focus away from San Miguel and his bungled job last year, and instead give the run a good name.

And Henry Cuellar hosted a town hall meeting in Zapata.  That's cool.  Now if he could only do that here, that would be great. 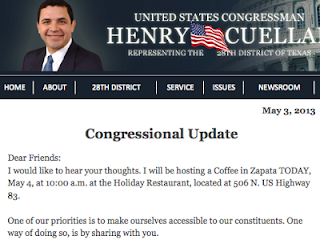