Christmas is more than seven months away, but it's definitely on the minds of our state legislature.  The house passed a bill to allow TX schools to recognize the holiday without fear of litigation.
Richard Raymond is all too happy to play along.

Rep. Raymond’s Bill Allowing Schools to Recognize Merry Christmas Passes House
AUSTIN --Yesterday Rep. Richard Peña Raymond, Chairman of the House Committee on Human Services, passed a bill unanimously 147-0 out of the Texas House of Representatives that authorizes public school districts to recognize traditional winter celebrations like Christmas and Hanukkah. It also allows district personnel to offer traditional greetings like "Merry Christmas" and to display holiday scenes as long as they include symbols of more than one religion or of one religion and a secular symbol.
"This bill allows schools to recognize Merry Christmas without fear of a lawsuit,” Rep. Raymond said. “It is important to recognize the religious and other winter traditions that are so valuable to American culture.”
The bill does not allow school districts to endorse a particular religion but ensures that students and staff alike are free to express their beliefs and share their traditions. 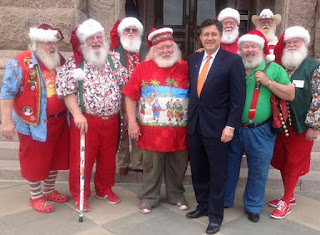 (Presser and pic courtesy of the Raymond camp)
Chalk one up against the war on Christmas, I guess.
I find it interesting how press releases are presented to us.  The announcement's header describes the Christmas bill as Richard Raymond's, yet media outlets make no mention of him.  Apparently this gem belongs to one Dwayne Bohac.  And it was because of Raymond that the "Merry Christmas" bill passed 147-0.

It's amazing the things our state legislature focuses on.  It would actually be meaningful if students and staff actually were on campus to celebrate the holiday.
Posted by KeyRose at 2:40 PM