What About Our Lunch?

The Strategic Alliance for Business and Economic Research Institute did a study about the economic impact that Mexican shoppers have on local economies.  Laredo came in behind Hidalgo County and El Paso
Hidalgo County (Edinburg) is far and away the best performer in this arena, according to the data.  You could say that they are eating our lunch and kicking our dog afterwards.

But gawd strike me down for saying that we're second fiddle to the valley; The mayor's bound to freak out. 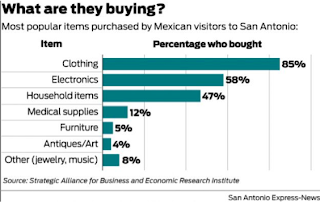 Those numbers are not shabby by any means.  I'm interested to know how the SABERI arrived at those figures.  And what of the manifestos, the tax rebates that Mexican shoppers get?  I would guess that they couldn't get sales tax rebates on hotels, and restaurant purchases, so some money is going to the state.  (Merchandise that is taken to Mexico is eligible for the manifestos.)

I made a call to the local Chamber of Commerce, but Mr. Conchas was not available for comment (all four times I called).  I contacted the Edinburg COC, but their point person was out for the day.  I was directed to Ms. Reyes of the Economic Development Council, but she was also in meetings.  Great.