Of course the Eagle Ford Shale has brought good fortune to many in the area, as the UTSA study notes.  You would expect that to be the focus -- financial impact of the EFS -- with a name like the Institute For Economic Development.  But that seems to be what everybody talks about and nothing else. 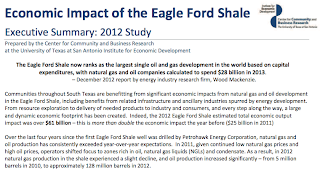 Local Eagle Ford Shale consultant, Joe Ceballos, shared with me the UTSA study.  In talking to him two weeks ago, he made note of the rapid growth seen in counties along I-35.  He also acknowledged the challenges facing drilling communities:  infrastructure wear and tear, the lack of housing, locals being priced out by exorbitant rents, pollution, worker injury/deaths, motor vehicle crashes, etc.

The details of the money flowing through local communities is quite impressive.  I've provided some excerpts to give you an idea of the impact. 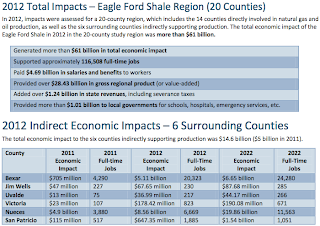 It all may sound well and good to praise the benefits of the Eagle Ford Shale but the play also has an uglier side. 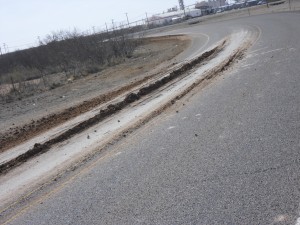 Pictured above is a site in Ector County where oil field sludge was dumped.  Whether this is always intentionally done by haulers is up for debate, but there's a way of finding out.

“They’ll crack open the air valves … and start leaking out onto the roadway when no one’s looking so they can get rid of their load. And then when someone comes up close [behind them in another vehicle], they’ll shut it off and keep on moving,” said Yelley.

Sludge haulers in Laredo have been cited before for transporting waste with no cover on top of the trailer.  What would happen in that instance is that the waste would spill over onto the road when the driver made a hard stop.  It wouldn't surprise me if illegal dump sites are present in Webb County since it apparently costs hundreds of dollars to dispose of the material at a licensed site; and we're at a loss for disposal sites, as I have learned.
Just recently, Los Botines residents voiced opposition to having a waste site established in their backyard.  I don't blame them.  If I was a politician, I don't know that I would have the forethought to see that this would be a problem.  But I think I would be a little more critical of the whole picture and not just praise the financial gain of a few.
Posted by KeyRose at 8:25 AM