City Manager Carlos Villarreal got a raise Monday night.  And not just any raise -- the man's pay was bumped up close to $40,000, hiking his salary to $230,000.00.  Once the natives got a hold of this, they were none too pleased.  The mayor and city council, however, had nothing but glowing remarks for Mr. Villarreal.  (Video)

The LMT message board really lit up with colorful commentary.  People even took to posting the story on their Facebook feeds to express their dismay over the salary raise.  (I want to take this opportunity to comment on the youthful headshot the LMT used for the story.  Bravo, LMT!)  The criticism was expected, especially when you consider that $40,000 is more money than most Laredoans see in a year.

Before council voted on the city manager's raise, the mayor had to, of course, comment on the measure.  The mayor was in top form that night - repeating phrases, using his earnest voice, tapping his chest with his hand, and pretty much boring everybody to death.  In the picture below, you can see Councilman Roque Vela Jr. leaning back and showing us that he wished to be somewhere else.

I always thought the mayor provided us with plenty of comedic relief, but Mr. Vela's gestures are pure gold.  Thank you, sir. 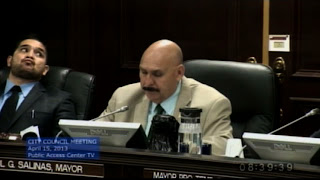 Apart from the mayor's ill-advised use of the word emphatic in his speech, he said this of Carlos Villarrreal:  "You're doing a heck of a good job."  Where have I heard that before?  The mayor cited Mr. Villarreal's loyalty, and commitment to doing his job.  For a six-figure salary, we most certainly would expect to see some loyalty and dedication.  Council members Mike Garza and Cindy Liendo-Espinoza also complimented the city manager, and spoke briefly on the accomplishments seen in recent years.

What wasn't mentioned was: the $11,000,000.00 deficit from last year; the $3 spike in trash fees; the unfortunate pick of former Police Chief Carlos Maldonado; the bogus grants lists staff puts out for the media; Mr. Villarreal's combative attitude; all the delayed construction projects; etc.

A point made by everyone involved was that the raise was appropriate because of our unique standing as a major trade hub, and the duties that come with dealing with international affairs.

The city manager's new salary may be well-deserved.  However, those who decided on the raise didn't do a good job of selling it to me.