Monies To The City

About these grants the city got because of their trips to Washington.... perhaps it's because Laredo is considered a High-Intensity Drug Trafficking Areas location.  Laredo has been designated as such since 1990.  About three weeks ago the mayor lambasted the LMT for ignoring the results of their work in Washington.  It was this weekend that city staff released to the LMT the financial gains the city has seen from their yearly junkets to the nation's capital.
The city provided - at the behest of the mayor - the LMT with actual grant earnings from 2011 and 2012.  The departments that saw cash infusions from the federal level were the airport, community development, environmental, and police. 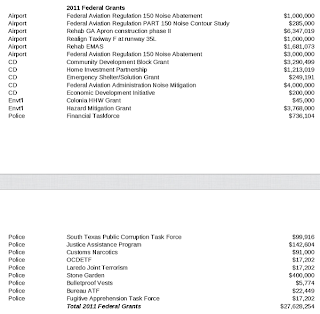 Some of the same categories, and money amounts appear repeated from one year to the other. 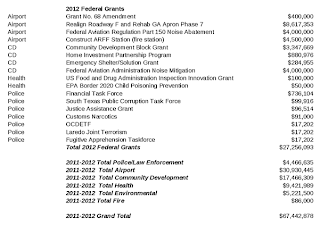 One of the criticisms we've had about city hall's trips to Washington is that they travel in large numbers, and some even take relatives along.  The capper is the party they throw for themselves and federal officials at the end of the five-day stay.

Frugality aside, let's focus on the actual grants our illustrious leaders garner.  The mayor, especially, is "emphatic" about the work the city does in D.C.  Their yearly trips reap actual rewards, according to him.  But if we go back to 2004, we can see how a $99,916.00 grant matches what they've listed for 2011 & 2012.  The Laredo Multi-Agency Drug Related Public Corruption Task Force grant has been given to Laredo even before the mayor assumed office in 2006.  In the lists provided, however, the item is under the South Texas Public Corruption Task Force category.

Some time ago I did a post about the city's COPS program funding.  I brought it up for the same reason that I'm bringing up this $99,916.00 grant now:  the mayor wants to impress us with numbers but those figures predate his tenure; they basically have nothing to do with his travel to Washington.  But he'll use them as justification for travelling there every year right before Spring Break for a whole week.