So, anybody have an interesting weekend?

UPDATE:  Perhaps social media outlets are not the best places to have serious discussions about heavy issues.  For one thing you're dealing with people who have short attention spans.
And both sender and reader depend on short messages that are mostly one-sided. 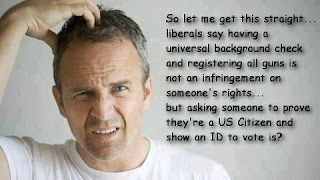 I found this attachment on a friend's timeline.  Actually I have several friends who have posted some sort of pro-gun rights statement on their feed recently.  Ever since the events of Sandy Hook Elem., the gun discussion took off.  Unfortunately, the merits of universal background checks get the same consideration as one's dislike for Monday mornings.

Usually what I've found is that people will 'like' a post like the one above and move on.  Every once in a while, a challenge will ensue and jabs are thrown back and forth.  No middle ground is reached and each side eventually veers off the initial conversation.  Our discourse mirrors that of Congress; that should give us an idea for the deadlock in D.C.

Universal background checks are wildly popular; Loopholes, however, will still exist, even with proposed legislation.  Teachers in Missouri who carry guns participate in annual drug tests and mental evaluations.  However, any suggestion for new gun laws are met with swift and stern opposition by what seems to be the majority of gun owners -- and by that I mean my friends.

With the seriousness of guns, doesn't it make sense to put everything on the table?  Daily acts of gun violence get a passing mention in the media.  Large scale attacks, on the other hand, get wall-to-wall coverage.  To some extent, that might make sense since I would consider Sandy Hook, and events like it, a terroristic attack.  Gun owners require more scrutiny.  Every gun needs to be tracked.  Gun ownership can't be reduced to snide remarks, and superficial arguments.  Moreover, to somehow equate the rights of gun owners with those of voters misses the point.  Guns and voting rights have their own histories, each needing a different tact.
Posted by KeyRose at 5:00 AM