I had not done this feature in a while, but a special numbskull has reared his stupid head.

Un tipo Daniel Bautista, who is not even old enough to drink, already has a lengthy criminal record under his belt.

Apparently this menso didn't stop when he was being pulled over by police;  no, he decides to peel out.  Then he crashes into a tree on government property!!!  For a dramatic finish, the car catches fire.  So I'm thinking he'll receive a bill from the fire department now.

The good news out of this is that there is nowhere to go but up for this guy.  Oh, who am I kidding?  He's probably out on bail and stealing clothes from somebody's yard sale.

Congratulations, Daniel.  You're our pick for Menso Not Mensa. 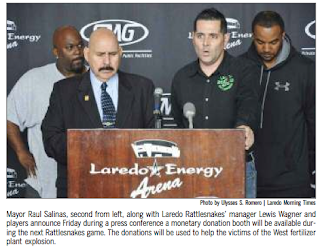 One more thing - The LMT included a funny picture of Laredo Rattlesnakes personnel and the mayor holding a press conference.  The organization will be accepting donations for the residents of West, TX, who recently suffered the effects of a massive explosion at a fertilizer plant.

Anyway, the shot above begs for captions.  It looks like somebody cut the cheese and doesn't want to own up to it.