They Say It's All Good 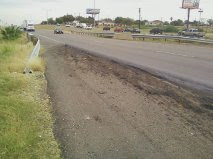 It's mind-blowing to hear the supposed, staggering economic impact the Eagle Ford Shale activity has had on south Texas.  Some of the local effects of the shale play are right in our face:  increased truck traffic, hotel occupancy spikes, friends and relatives employed by the oil and gas industry, sludge spills, etc.  But what will the millions of dollars infused into the economy really mean for Laredo?

The city and county must be feeling the love coming from the mining industry.  The City of Laredo has seen an increase of sales tax money coming back from the state the last four years.  That's a good thing.  What's not good is that city hall has to make up for an $11 million deficit.  We can take comfort in the fact that the Eagle Ford will help us avoid becoming the next Detroit, which is now being led by an emergency financial manager.  But it's frustrating to hear a rosy picture always portrayed when our trash fees are increased, again, to make up for a deficit.

Gasoline prices may not come down ever as hydraulic fracturing proponents suggested.  But at least we can see that more money is circulating within our city limits.  The trick here is not to squander it all.

UPDATE:  An article in the San Antonio Current entitled "The Sour Side of Life in South Texas' Eagle Ford Shale."
Posted by KeyRose at 3:28 PM