Okay, so San Antonio officials also went up to Washington to make their needs known to the feds.  It makes sense that Laredo would do the same, especially when the town's yearly operating budget is nearly half a billion dollars.  But is it really necessary to have 60 people go on this trip, and be serenaded?

Gonzalez will join more than 60 Laredoans who are at the nation’s capital this week advocating for federal funds and policy changes to help with various local issues, such as health, security, environmental, water and transportation.

Managing a city is serious business, and travel is necessary, but it's a little insulting when council members post pictures of their kids on Facebook having a great time in Washington.

But to get a better sense of how worthless these trips to D.C. really are, let's look back to 2011.

In a meeting with the U.S. Department of Transportation (DOT), the Laredo delegation discussed downtown improvements and beautification projects such as implementing “quiet zones” around the railroad in the most heavily populated areas downtown, as well as a bus processing facility, and renovating San Bernardo Avenue and Laredo’s all important riverfront.
“The trains blow their whistles at all hours of the day and night, but even worse, the vibrations from the trains are causing property damage—windows and house walls are cracking,” Council Member Cindy Liendo-Espinoza, District VIII, emphasized.
Council Member Jose A. Valdez, Jr., District VII, continued with a possible solution, “We would like to treat abatement for train and airplane noise similarly. With federal funding, we are able to purchase noise easements from property owners near the airport, and we are able to purchase damaged property and relocate homeowners. We would like to see a federal program to help us do that for houses close to heavily used train tracks.”

ALL IMPORTANT RIVERFRONT.  City officials must get continuing education hours on these trips because it seems that nothing really comes out of their meetings with people in Washington.  And really, if they're meeting with Sen. Ted Cruz, their words are just going to go in one ear and out the other. 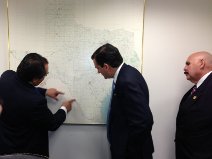 The picture provided by the City of Laredo features what Jorge Vera did the last three days in Washington: point to things.
Posted by KeyRose at 2:14 PM