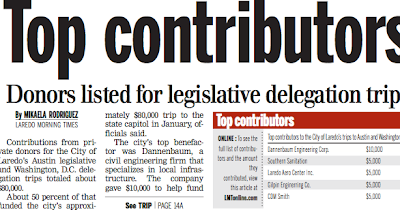 The city released the list of people and local organizations that contributed money to them so they could make their way up to Austin to lobby for more money to give those same people in the form of contracts, and then those people give back to the city so they can go back to Austin and D.C. so they can lobby for more money to give to those donators, and in return they give back to the city....... 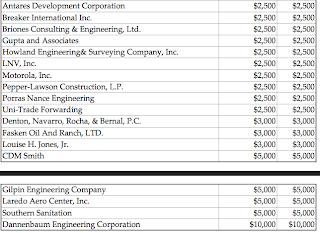 The LMT provided the list for us to view.  Pictured above are the people who donated several thousand dollars for city staff and officials.  Donations supposedly made up only half of the total $80,000 Austin trip tab for 2013.

Last year the city provided the public with a list that includes a lot of the usual suspects.

Coming soon, the LMT will show us the fruits of the city's labor when Carlos Villarreal's office releases what money has come to our neck of the woods.  Can't wait.