Laredo Culture: Clashy As It Wants To Be 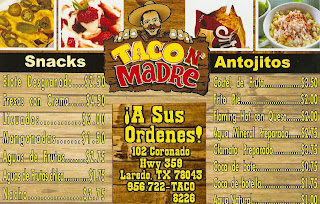 In the convoluted world of prosaic Tex-Mex cuisine (and I use that word loosely), vendors must distinguish themselves from the masses.  It's not an easy task when delving into the wants of unsophisticated palates.  Ingredients are limited further when costs have to be reined in.  From this framework, choices can only be tweaked so far.  But if it's tortilla chips dressed in sluggish cheese, and topped off with fervent garnishes they seek, who am I to protest?

The only manner left for a pedestrian pabulum peddler to stand out is to market oneself with the panache of young diva wearing a meat dress on Good Friday.  Sure the moniker TACOn' MADRE may be crass on the surface, but we have to remember that the dishware involved in this venture is composed of styrofoam cups, and Frito bags turned on their sides.  Forgive me for disparaging a popular American icon, but if I was asked to translate the name of this eatery, the first thought that would come to mind would be "it's great!"

I doubt that our entrepreneurial compadres had Tony the Tiger on the mind when searching for titles, but given this town's propensity for copyright infringement, I wouldn't put it past them.

For now, TACOn' MADRE lives on and they request your patronage.  They will endure as long as the cream flows, and until a better catchword emerges.  Bon appetit, bitches!
Posted by KeyRose at 9:44 AM