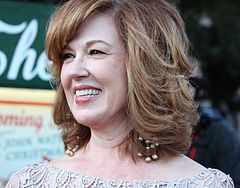 My idle side got the best of me this weekend.  That's not to say that my weekend was unproductive, but I neglected to post anything on a character from the movie "Eddie Macon's Run."  So without further ado, I'd like to feature Lee Purcell.  She played Jilly Buck, a character familiar with the border that helps Eddie Macon (John Schneider) cross into Mexico.  Another 1983 movie Ms. Purcell appeared in was "Valley Girl."  Two good movies for this burgeoning, teenage movie lover.

Fast forward to March 1993 and we get the story of a 300-lb. earthworm carcass in Laredo.

The 200-word story said that frustrated commuters called police that morning after being unable to drive around the 300-pound worm, described by one motorist as "a grey, fat, rubbery thing." A Laredo State University entomologist, Dr. Luis Leacky, pointed out a sticky trail of mucus along Interstate 35 and surmised that the mutant had emerged from the polluted Rio Grande. U.S. Border Patrol agents, assisted by Laredo police officers wearing rubber gloves, used two cranes and an 18-wheeler to remove the carcass, according to the paper.
That day, Bill Green, publisher of the Hearst-owned Morning Times, dismissed the reporter who wrote the tale. The editor who allowed it to see print also left the paper, although he won't say why. (The publisher would only say the two "no longer work here.") The next morning, Green signed a front page apology to readers on both sides of the border--as well as the Border Patrol, the Laredo Police department and Laredo State University, home of the fictitious Dr. Leacky.

In the age of Twitter, and instant messaging, I would assume that this story would die pretty quickly and people wouldn't waste two minutes going out to see what was really going on.  However, it's disappointing that nobody would carry on with this hoax as a tribute for the reporter.  The possibilities are endless.

The San Antonio Express-News is also taking a look back to March 1983.  That I'm doing the same thing is purely coincidental.  If you recall from nine days ago, I composed a post on another character from "Eddie Macon's Run," Jay Sanders.  My focus on EMR will end in a couple of weeks.

If you can think of anything else that happened in previous years, in the month of March, let 'er rip.
Posted by KeyRose at 10:34 AM