A blog reader submitted some information into the LaSanbe world news headquarters on COPS funding after watching the mayor go on about monies he's helped secure during his, and city council's recent trips to Washington.  The reader made note about how the county, and not the city, got money from the COPS program during the last round of disbursements (2012), over $600,000 to be exact.

Everybody around the country gets this type of funding to finance their law enforcement operations.  But to hear the mayor talk about it, it sounds like he and the city pulled a rabbit out of a hat.  All they have to do about it is give Henry Cuellar a call and he can do the rest, complete with a photo op and press release. 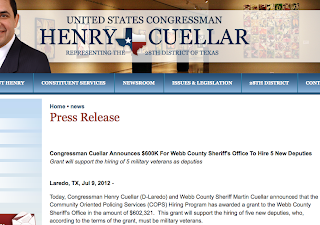 It's important to discuss these details because our elected officials don't think we're paying attention, and they think they can get away with regurgitating the same old news to justify their travel habits.  When they go to Washington next year, I'm sure they're going to bring up COPS funding as a reason for making the trip.  And they're going to take 60 people with them again.  And they're going to throw a party.  And on and on.