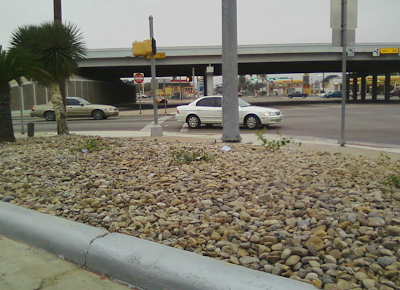 By now most of Laredo has heard about the gentleman who won a cool $20 million (15 after taxes) playing the Texas lotto.  His phone has been ringing off the hook ever since.  But the Conoco gas station - where the ticket was sold - was also awarded $200,000 for their part in making a Laredoan much richer.

This weekend I noticed that a landscaping makeover has occurred at the corner of Saunders and San Dario Ave., the site of the Conoco.  It just might be a coincidence that it happened after the jackpot winnings, but it's a good change nonetheless.  Before, the space was covered with a native grass; I don't remember if there were any plants in place besides the yuccas you see to the left.  Now they went with a hardscape design that features several drought-tolerant plants.  Bravo!

I'd like to see more of this throughout the city.

In more serious news, the terror alert warning has been raised to watch your ass amarillo.  Several news outlets have been reporting about the recent wave of violence in Nuevo Laredo.  Nightly we've heard helicopters hovering too close to our neighborhood.  I don't know exactly what law enforcement agency it is that's being a pain in the ass.  Unfortunately it's all a part of life now for us and our neighbors in Mexico.