San Miguels Getting A Break

Press release courtesy of the City of Laredo:

Thirty Three Fire Academy Cadets are set to graduate tomorrow Friday February 8, 2013 at 9:00A.M. The ceremony will be held at the Laredo Civic Center Auditorium.
“This accomplishment exemplifies the commitment of the graduates to serve their community and the commitment of their instructors to produce highly trained, professional firefighters whose mission is to save lives and property”, Fire Chief Steve E. Landin, said.

It was confirmed to me that Charlie San Miguel's sons are in this graduating class.  The city has stayed mum on the whole issue of nepotism concerning the councilman and his sons, Carlos and Roberto.

The city council got creative in giving the San Miguel family preferential treatment by trying to incorporate nepotism rules into the fire department hiring process.  But this little diversion is meaningless since the application for the fire department already includes the question about any relation to the mayor, or city council.  If it's asking you about a relation to a city official, then the reason for the question being there is to avoid any type of nepotism from taking place.

Charlie San Miguel has really settled in to his position quite nicely.  He gets to name a new pool after his parents.  His sons get a pass.  And his sister gets a nice city contract.  Yes, it's good to be a San Miguel.

UPDATE:  Some people don't get the perks that the San Miguels get.  (name and dates have been blocked out for privacy) 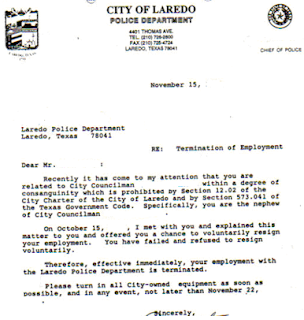