Mayor Salinas, or as one of my readers calls him, Mayor Papas, is featured on an NPR story about immigration.  The interview which also features the mayor of El Paso is seven minutes long.  Check it out.

Mayor Cook comes off as thoughtful, and organic.  Our mayor not so much.  Canned (answers) is the word that comes to mind in listening to Mayor Salinas.

On a side note, I'm going to link current posts from other local blogs on my sidebar.  Currently, on the front page, you can see a link for LaredoTejas, DeLaredo, and WakeUpLaredo.  I try to keep up with what's going on in the Laredo blogosphere, but it's difficult sometimes.  Feel free to include the name of a blog that I'm missing, or a story that you think is worthwhile.  I'll put up a link on the right, or I'll include it in a blog post.  Thanks.

Some of you may have noticed, but the LMT has a re-design in place.

UPDATE:  Almost forgot about a picture I took the other day.  It's of a policeman talking to a person who seems like a female panhandler on the corner of Lafayette and Santa Ursula.  Don't know if the city is getting tough on people asking for cash on street corners. 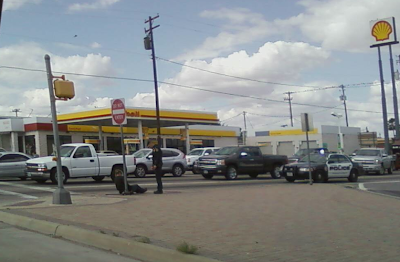