MMD Is What They Call It 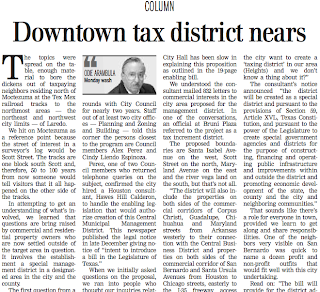 Odie Arambula laid out today the details of the proposed Municipal Management District which will include much of the historical part of town.  The Texas Legislature must okay the plan.  City council, along with its consultant out of Houston, Hawes Hill Calderon, sent out notices to the Laredo business community to keep them in the loop.  It would be interesting to know how they took it, especially this passage:

The District will have the power to levy ad valorem taxes and to impose and levy assessments on property within its boundaries...

Read the rest of the notice below.  (Submitted by a reader) 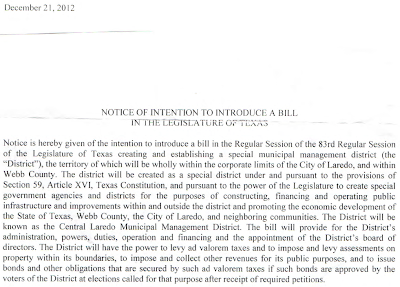 And there's a map to give you a visual idea of where the "assessments" will be levied. 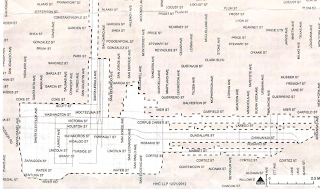 As I understand it, a municipal management district is established to provide for economic development.  But benefits could extend beyond the boundaries of the area.  This is how Councilman Alex Perez puts it:

This is part of the inner city blight reinvestment initiative.  This tool along with others like the Neighborhood Empowerment Zones (NEZ), tax increment refinancing zones (TIRZ) and other economic tools are being implemented to address our inner city blight.  Districts and areas include the Heights, Azteca, downtown, San Bernardo, Chihuahua and Guadalupe.  Boundary maps are available.

These tools have been used with great success in over 60 cities.  Before and after pictures are incredible.  We have hired a consultant with district 8, 3, and the Streets of Laredo putting a third of the $150,000 consultant fee.

Mr. Perez's district includes the Heights neighborhood, Guadalupe, and Chihuahua streets.  The others he mentioned are jurisdiction of Councilwoman Cindy Liendo-Espinoza.  She told me that not all business owners are happy with the idea of a municipal management district.  However, once they learn about the benefits of the plan, they'll be more open to it, she added.  As far as new taxes are concerned....

They will pay an assessment that will go back to improvements.  (Only in that area)

A long, long time ago when one Gene Belmares had everybody's ear, talk was all about converting the sports venue tax into a b4 model to spur economic development.  I'm not sure if this new MMD idea is a way of going forward since the b4 didn't go anywhere.  What I think is certain is that people will want to see results fast if they're going to be shelling out more money.