Who Is Hector Vargas?

He is supposedly head of Laredo Logistics International, a consultant for the local transportation market.  City officials have awarded him a lot of money to put together a Logistics Cities World Forum to take place next year.  This, of course, has upset other local groups who feel they've been shut out of the process.  But there's a reason the city is doing business with Mr. Vargas exclusively.

Hector Vargas has been director of the free trade zone, Meridian 100.  Back in 2008 the city and Meridian signed a memorandum of understanding to work on enhancing trade here.  Mr. Vargas has travelled with city staff to El Salvador to create working relationships with other countries.  In the picture below, you can see that Eduardo Garza also attended. 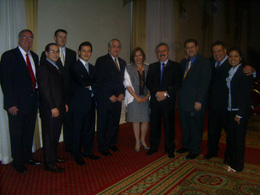 In the Laredo Logistics Int. website, Uni-Trade, i.e. Eduardo Garza, is cited as a partner.

It's no accident that these names keep popping up.  City leaders, Mr. Vargas, and Mr. Garza have been connected at the hip for some time now.  And both businessmen have benefitted from this cozy relationship.  But gawd forbid anybody should raise any concern over this.  You're bound to get a hairy eyeball from Councilman Juan Narvaez.  Via today's LMT (Mikaela Rodriguez):

The Laredo Development Foundation was awarded $290,000 in the city’s 2012-2013 budget, but Narvaez said the organization has not delivered in promoting the city as it should be, besides planning the yearly Laredo Logistics Manufacturing Symposium.

He also called on other local groups to bring fresh ideas to city officials for consideration.

“What is (LDF’s) goal with the money and how do they plan to invest it?” Narvaez said.

“If you don’t take risks, you don’t make money. Maybe some of these people criticizing (the conference) have never taken risks.”

Of note is the fact that Juan Narvaez appointed Hector Vargas to the Transportation and Traffic Safety Committee four years ago.  They're BFFs, hence Narvaez' backing of Vargas in the paper today.  Hector Vargas is getting his because he's worked the system like nobody's business.  He knows how to play ball, and the city has been too willing to go along.

Amigo blog LaredoTejas thinks the city is spending its money frivolously.  But what's 120K amongst friends?  At the very least, city leaders could score some free plane rides out of this.
Posted by KeyRose at 10:23 AM