Yesterday afternoon I reached out to several council members after reading about Select Energy Service's expansion (see post below) in Laredo.  SES stands to gain from tax breaks as they grow their water management business for the Eagle Ford Shale.  My concern was that we would hear very little discussion from city council on such an important subject, local water use.

As expected, I wasn't disappointed by city council, and the city manager.  What I thought should've been a detailed explanation about future water needs, expansion in infrastructure, water fees for commercial use, truck traffic, tax breaks, etc., instead only lasted about three minutes.  And Roque Vela Jr.'s comment pretty much says it all.

This is something that they've been doing business for a while.  They're growing.  I think it's imperative that we essentially get out of the way and let them continue to grow and create jobs in our area.

Jorge Vera, and Roque Vela downplayed highlighted the fact that Select Energy was expanding locally, that they're only adding more personnel.  If that's the case, then why the tax abatements?  Being business friendly is one thing, but turning a blind eye to things is shameful.

Check out the footage from last night's meeting to see the level of intellectualism, and concern coming out of City Hall.

A blog reader recently sent me some illustrations that detail expansion projects in the works for Mines Rd.  Jorge Vera gladly pointed to these in his campaign poster, but as far as I know, the projects are still in the planning stages.  You would think he would bring up infrastructure expansion in his discussion last night since Select Energy will be situated in his district, but......... 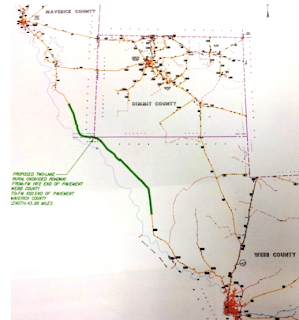