The Highway Is Alive Tonight 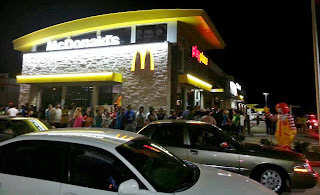 Not even a school night could keep the masses away from the (rebuilt) McDonald's debut on Zapata Hwy last night.  A dependable source who made the scene said that seven police units were helping to keep the peace.  That's understandable.  When you're selling Big Macs for $1 at midnight, you have to make sure crowd control is on tap.  You don't want things turning into a Black Friday bum rush.

If I had the circadian rhythm of a vampire, perhaps I could've attended Ronald's celebratory event.  As Laredo's Most Imposing Blogger* I should've used the occasion to conduct an informal poll.  I could have asked the hungry squatters what their thoughts were on the presidential debate, or if they take a man's crisply-starched shirts into account as they vote for sheriff.  Alas, I missed my chance to get in touch with the common folk.  Another day will dawn; when it does, I'll be there.