Earlier this month I posted some comments on the actions, or lack thereof, that the city council was taking to deal with the hiring of Councilman Charlie San Miguel's sons.  Mr. San Miguel, on the advise of staff, used the my-sons-are-protected-by-civil-service defense.  Following his lead, Councilman Mike Garza suggested that the Civil Service Commission be more clear about its nepotism rules. 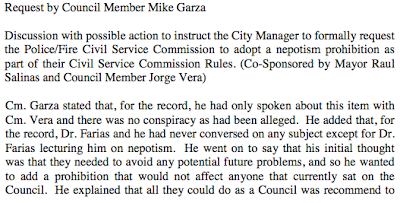 This actually doesn't speak well of Mike Garza because he's basically taking Charlie San Miguel, and staff at their word, and not looking into whether the San Miguel twins are really shielded from nepotism rules.  Also, protecting his fellow councilman by having new language inserted into civil service "not affect anyone that currently sat on the Council" is pretty cowardly.  He wants to prop up nepotism rules but he doesn't want anyone sanctioned for it.

So if civil service is not clear on nepotism, then why is it asked on police and fire departments applications? 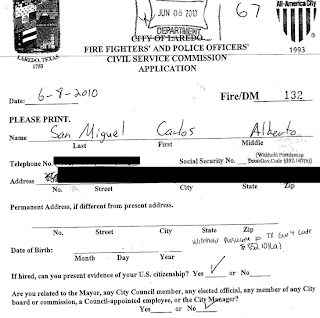 Both Carlos and Roberto answered 'no' when asked if they were related to any elected official.  They were technically right because Charlie San Miguel didn't take office until early 2011.  But at the time that his sons submitted their applications to the city, surely Charlie had made his intentions known about seeking office.  His campaign commercial debuted in October 2010.  I would dare the councilman to show me receipts for his campaign signs. 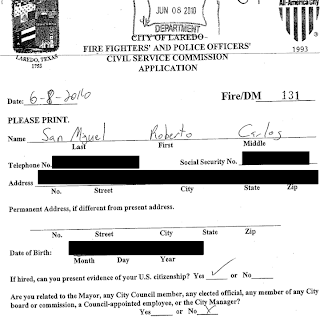 Both sons went through background checks, agility tests, and a written exam before finally being hired by the city on July 25, 2011.  Charlie San Miguel was already in office, and his sons probably forgot about the nepotism question on their applications, or simply decided to overlook it.  It could be that a lot of people overlooked it.

City council is dragging its feet on taking proper action in this matter, all to keep from rocking the boat, so to speak.  Charlie San Miguel and his sons are violating local nepotism rules.  City staff is not without fault either.  Issues of nepotism aren't something that suddenly appeared.

I encourage everybody to go out and vote, but I also want everybody to call out city leaders when their not holding up their part of the bargain.