Tonight's city council meeting started with the city manager going through the order of events that transpired after Charlie San Miguel's mud race that took place on September 15, 2012.  The timeline was presented to give the public a clear understanding of what happened until all the proceeds of the race were counted.  What is remarkable is that the money wasn't counted until Tuesday the 18th, and that more funds were turned in on Wednesday by somebody who helped collect monies.

The city manager mentioned that city resources were made available for the race. Parks & Leisure staff was present at the event, along with Charlie San Miguel, but it was only Osvaldo Guzman, the department's director, who was suspended for the mishandling of money.

Councilman San Miguel was so bothered by Mr. Guzman's suspension that he saw it fit to compensate him for the pay he lost.  But the city manager saw it another way.

It violates all the aspects related to the city charter, which is interference with administration.

Mr. Villarreal voided the check written by Charlie San Miguel because, according to him, it eliminated an administrative act.

During all the fireworks at city hall tonight, I knew I could count on my councilman, Alex Perez, to sit idly by while an important issue was discussed at length. 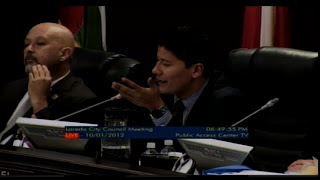