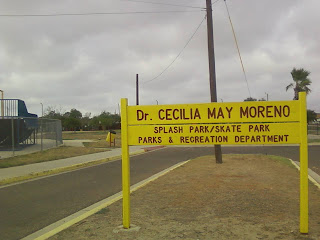 I noticed these new yellow signs on park spaces at Lyon and San Francisco Ave.  Apparently Parks & Leisure has money for branded pieces of wood, but not so much for one lick of landscaping.  Anyway, I'm fascinated by the fact that city officials, or any elected officials for that matter, want to name facilities after people.  I'm starting to think that that's the only reason people run for office around here:  to have something named after them. 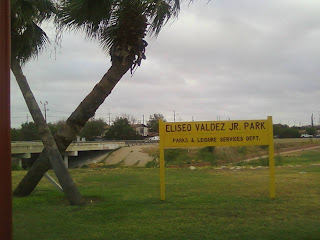 Recently, city council discussed naming streets after people who have served the community.  I don't mind that, but I'm thankful I don't have to live on Raul Salinas Dr.  If that was the case, every time I would have to fill out an application, I would be reminded of somebody too lazy to discard of LareDOS issues by himself at the airport.

Get out and enjoy your public parks before the chilly 80-degree temperatures set in and keep us from going outside.

Email ThisBlogThis!Share to TwitterShare to FacebookShare to Pinterest
Labels: Parks And Leisure