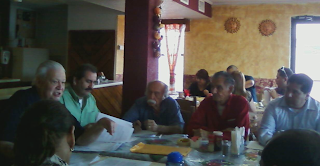 Yesterday I had a chance to sit in at the VIDA (Voices In Democratic Action) meeting where they went over agenda items such as freedom of information requests, city council conflicts of interest, and their website development.  I like to consider myself informed when it comes to knowing what goes on around here, but after hearing the back and forth between VIDA members and private citizens, I realized two things:  I am mostly out of the loop, and it's less than a handful of politicians who are interested in making Laredo a better place.

At the last city council meeting, VIDA invited councilmembers and the mayor to yesterday's meeting.  The only elected officials who made it out there were Jose Valdez Sr. (LISD), Mike Montemayor (Webb County), Hilario Cavazos, and Rene De La Vina (LCC).  I realize that people are busy, and if you have plenty of politicos attending, the risk of creating a quorum arises.  But to have no representation from other taxing entities is very telling about how progress is valued in this community.

VIDA is having another meeting in two weeks.  Anybody is welcome.  If you want to learn a little about how things are run in Laredo, I recommend you attend.  If not, you can see them in action at city council.  You can go there too to support them.

Email ThisBlogThis!Share to TwitterShare to FacebookShare to Pinterest
Labels: City of Laredo, VIDA