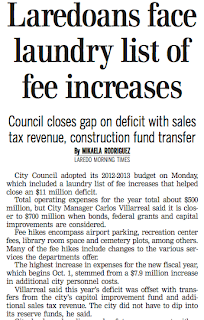 I thought the "fee" increases were necessary to buy new equipment.

The highest increase in expenses for the new fiscal year, which begins Oct. 1, stemmend from a $7.9 million increase in additional city personnel costs.

The segment of last night's city council meeting that I found interesting was that of the mayor suggesting to city staff to raise awareness of the problem of driving while intoxicated, and the consequences associated with it.  Laredo has more DWI (DUI) offenses already this year than it had all of last year, according to the mayor.  In putting forth the details, he mentioned that anybody charged with such an offense would be denied a lucrative driving job that the Eagle Ford Shale has to offer, because, you know, it's all about the Eagle Ford Shale now.

Whether or not a young Laredoan finds a job in the fossil fuel industry, they can always strive for a position in public service or law enforcement.  DWI offenses in those sectors seem to be brushed under the rug.
Posted by KeyRose at 8:24 AM