There Must Be A Reason For This 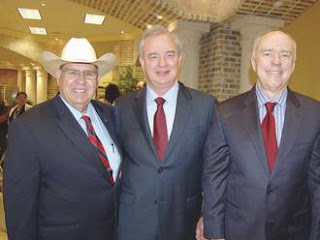 ...Let's name John Sharp Mr. South Texas, and we can throw a party to make it official, even though nobody cares.  And we'll have everybody wear red ties and the mayor can wear his cowboy hat.  It's not like he's a rancher or anything, but that's not important.

Judith Zaffirini can wow us with her signature black cloaks, you know, during la canicula.  Oh what fun it will be.  It's more fun than people are allowed on a Thursday afternoon.  But let's not invite Dr. Farias because that man's an agitator and a major downer.  No, we want things to be underwhelmingly lively, with a smile on everybody's face.  Good, right?

The invitations should go out at once, and don't forget to include "be there or be square" towards the bottom.  Ohmygawd!  I'm so excited!  It'll be a blast.