Hat In The Ring 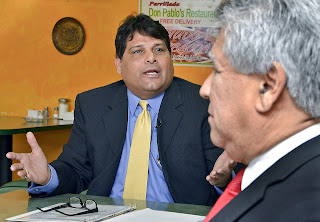 Published: Wednesday, August 8, 2012 9:37 PM CDT
Rick Flores' name may still appear on the November ballot as an independent candidate for Webb County Sheriff.
Flores lost an average of 80 votes during the runoff elections on July 31.
As an independent candidate, Flores needed to raise at least 500 support signatures, but those supporters could not participate in the primary elections from May 29 or in the July runoff.
“Regardless that we lost those votes, we will continue on the electoral process,” Flores said via a phone call. “I talked to the Department of State to get advice on how I could show up on the ballot (and they)
Free publicity hound and sheriff candidate Rick Flores wore his favorite cuff links for one of many photo ops between now and November 6.  He is determined to let the voters decide whom they want as Webb County's top cop.

On a side note, Don Pablo's Restaurant has entered the mix to possibly host LaSanbe's next meet-up.

Meanwhile, in a city council contest......