Laredo Is Safe But... 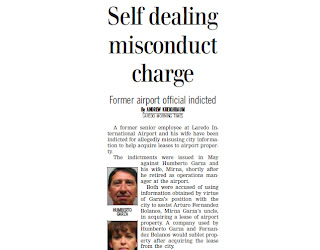 "Once all the evidence is brought to light, it will be determined that the city is not out a single penny and in fact income producing properties have been provided to the city,"  he said.

I first read about this story in the new issue of LareDOS.  Yesterday I posted part of the editorial dealing with the ethics commission currently in the works.  In it Meg Guerra brought up the case of Mr. Garza.

...Humberto Garza and his alleged longtime scheme to contract and to lease to himself some of the city's airport properties through dummy entities and corporations.
Garza was indicted by a 111th District Court Grand Jury on May 9, 2012 for misuse of information and misapplication of fiduciary property.  In his capacity as operations manager, Garza was privy to information not made public about lease opportunities, negotiation tactics, and potential lessors' interests and needs in city property.

We'll definitely hear more about this story through other outlets.