Did You Hear About This?

Last night I came across a story that, once again, painted McAllen in a very good light: the city converted a former Wal-Mart into a 124,500 sq. ft. library.  My first thought was, if a property that size was dropped in our lap, we wouldn't automatically think library.  First the property would sit there for years, and then it would be bought up by an enterprising individual, only to have a Dollar General eventually appear amidst other franchises.

Now, I'm not knocking retail chains or any type of business that provides revenue for the city.  Without them, we wouldn't have an empty arena, and a baseball field with rough edges.  But to take pride in the fact that we have the best money-making Wal-Mart in the nation misses the point about where our priorities lie in terms of quality of life.

On a popular social media outlet, people made somewhat innocuous statements about the opening of the McAllen library.  One commenter vaguely pointed to Wal-Mart's dominance in the Gateway City, while another said that McAllen was "nicer" than Laredo; Definitely nothing in the realm of a Chris Rock 4th of July tweet.  But our city's Public Information Officer went on defense and chimed in to set the record straight.  Of course, I threw in my two cents to keep things real.  Check out our exchange below. 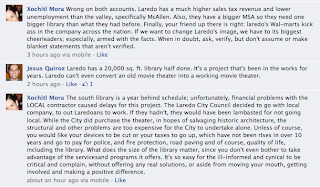 Laredo's main public library totals 60,000 sq. ft.  How ironic that Kell-Munoz had a hand in that.  (Recently they submitted a revitalization plan for downtown Laredo that has yet to see the light of day)  In south Laredo, a branch of the library had been closed for some time.  The site, located across the street from the fire station on Zacatecas, was small, but it served as a important resource for the people of the Santo Baby neighborhood and the rest of the south part of town.  It was a whole two years ago that construction for a new 20,000 sq. ft. facility started.  That project, however, is presently in limbo because the contractor was placed on default.  Money problems on the part of the contractor arose, and now the City of Laredo is looking to find somebody to finish the job, along with a northwest recreation center.

I'm in awe of what McAllen did with a former giant retail space, whether they needed a new library or not.  So what if Laredo has a lower unemployment rate than McAllen, or that we raise more tax revenue from sales.  We are looking at an $11 million budget deficit for the coming year.  And we have unfinished projects left and right.  To look at their progress and not be humbled by it is hard-headed and myopic, I think.

Ms. Mora's comments are a reflection of the city's attitude.  We in the blogging community compare Laredo and McAllen as if it were some type of pissing contest, and local city officials are quick to take that sort of criticism personally.  They get defensive and are ready to point to Laredo's supposed superiority.  However, they ignore the blaring examples of ineptitude and poor planning.  Let's give McAllen props for a job well done, and then try to figure out how we can better our own situation.  Let's not be petty about the Joneses having a greener lawn.  Let's get inspired and put our best foot forward, if that's possible.