KSAT's Jessie Degollado, a Laredo native, visited our neck of the woods recently to talk to the natives about the city's image problem.  The Laredoans who were interviewed did a fine job in front of the camera, but our mayor almost busted a vein in trying to dispel rumors about Laredo being unsafe.

Laredo is a safe city.  The problem is that non-Laredoans don't know that Nuevo Laredo and Laredo are two different things.  The two cities are divided by a river.  What happens over there doesn't happen here.  Also, John Schneider once was here.  But I digress.

People, however, will always have their doubts about Laredo.  You can cite ignorance as the main culprit.  KSAT took a poll and it doesn't bode well for Laredo. 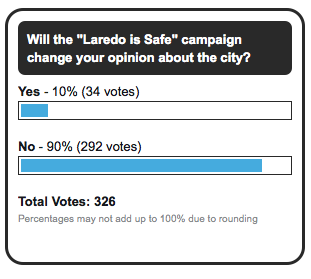