My wife and I have noticed over the years that any taxing entity that hands out contracts tend to go with the lowest construction bidder.  Like clockwork, budgets run over, and to top it off, deadlines are missed.  City Manager Carlos Villarreal, however, doesn't think the original $18 million price tag was set in stone.

"The $18 million was a figure that was pulled out of a (City) Council meeting without knowing what amenities would be lacking," Villarreal said.  "We have to make sure we won't have a stadium that's going to be constructed to 50 percent of capabilities.

"Those expenditures were necessary.  In the long run, it will pay off for itself."

In other words, the figure was pulled out of somebody's ass two years ago.  Nobody could've predicted that the stadium would need a parking lot, or a press box, and that those expenses would need to be factored in.

City council should give Mr. Villarreal another raise for his nonchalant response.  While we shake our heads at the enormous amount of money spent on the stadium, he keeps his cool about the whole thing.

Back in 2010, city council used 50 percent of its capabilities in coming up with the $18 million figure.  To be fair, the architectural plan didn't say anything about furniture.  We were fools to ever think that the facility would cost that much.  And I was a fool to ever think that the stadium would be built for a mere $7 million and belong to the Broncos.

Thankfully the Sports Venue Tax is coming from some far away place, some place where others are paying for it and not us. 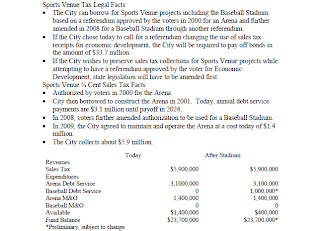