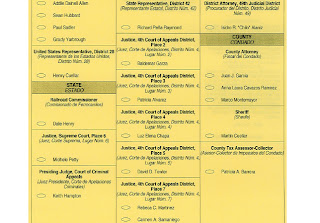 Name placement on the ballot doesn't seem to have much significance for local candidates.

It's been said that whomever appears first on the list has a better chance of getting more votes, and presumably winning that particular race.  But it only resulted as such for the candidates that ran for statewide office.  In Webb County, Rebecca Martinez got the majority of the vote in her bid for Justice 4th Court of Appeals, and Addie Allen garnered the most votes in the US Senator field of four.  Mr. Allen, however, did not make it to a runoff.  According to statewide numbers, Paul Sadler, and Grady Yarbrough will go up against each other next month.

What this tells me is that the locals are unfamiliar with statewide candidates and therefore blacken the first oval that's in line.  That approach doesn't make much sense.  Why urge people to go vote when they're not going to be aware of who exactly is running for what office?  To be fair, I didn't know anything about most of the candidates and issues placed on the ballot this year.  But if Laredoans continue to vote blindly as they did, then we should not be so embarrassed about the low turnout.  What we should be embarrassed about is the lack of awareness on everybody's part.

I don't want to get into the 78 percent that Prop 3 got.  That's where Webb County-ans support a vote to legalize gambling in Texas to help support education.  Again, what does that say about our knowledge of state issues?

The people who went out to vote should be given some credit for taking part in the process, but let's not get all congratulatory when they put little thought into it.
Posted by KeyRose at 2:19 PM