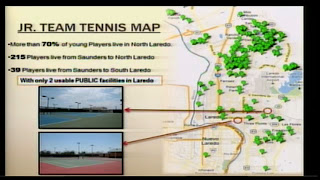 Members of the US Tennis Association went before city council Monday to present their case that Laredo needs more tennis courts to keep up with the increase in membership.  The slide they provided above shows where the majority of new players are coming from, north Laredo.  And the only two facilities that have courts that are up to par are the new Haynes Rec. Center, and the decades-old Market Courts.

The Market Courts are full most of the time, that is, when the weather is pleasant.  If you want to be guaranteed a court to play on, you have to go out there on Friday evenings when the place is practically deserted.  If you must play, and the facility is crowded, you can always go use the two dilapidated courts near Nixon H.S., as my son and I have done.  There the nets are barely hanging on, and the playing surface has major cracks in it.  It's pretty depressing but it's all we've got sometimes.

The USTA is requesting that the city build more facilities in north Laredo.  As a resident of south central Laredo, I couldn't agree more.  But the city manager will tell you that no new expenses can be taken on since the city is facing a major shortfall.

Whenever the city gets its act together, perhaps they can build more tennis courts to adequately serve the long-forsaken public in the north part of town.  They have to, if anything, for the children.