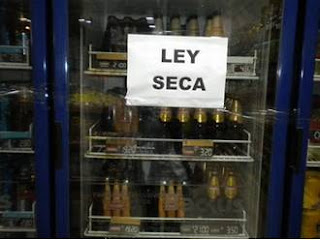 Those wanting to get their buzz on in Mexico this weekend will either have to do so today, or stock up on their favorite spirits and drink them in private Saturday and Sunday.  Our southern neighbors are having a major election Sunday and that means that, for 48 hours, no alcohol can be sold or consumed in public.  Authorities will be out making sure everybody is in compliance; Citations will be issued to those who are not.

The rationale behind the 'Ley Seca' is that people should go to the polls sober to make an informed decision.

Back in the early 90s, I knew when the ordinance was in effect because my friends would have limited entertainment choices and they would be stuck at home or something.  This weekend, however, I'll keep a watch to see who becomes Mexico's new prez.  Don't know if my friends will do the same.
Posted by KeyRose at 9:00 AM