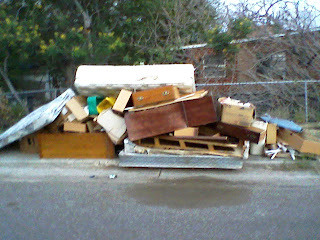 Seems like a lot of people have been on a spring cleaning bender these last few weeks.  I've seen a lot of old furniture on city curbs.  It's unfortunate because pedestrians, or young bicyclists have an obstacle to overcome; And the items discarded are really not recyclable.  Then again, if you're Frank Sciaraffa, a barrier like the one pictured could come in handy against the threat of projectiles.  Still, it's an eyesore.

Laredo has had a problem with neatness lately.  And people have taken notice.

The Caller Sports crew bids you goodbye from Uni-Trade Stadium, aka the unfinished portion of Nakitomi Plaza.

It's a dig against Laredo, but I give it props for including a "Die Hard" reference. 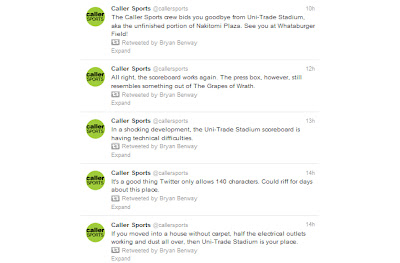 After the natives attended the first Laredo Lemurs game, I thought people were going to be more vocal about the unfinished stadium, but nobody made a peep.  I was waiting for the Times' Op/Ed page to be flooded with disappointed comments on the condition of the facility.  But perhaps it's what the public has come to expect: big promises with little follow-up.  Poor planning.  Apathy.
We've come to expect the grass along Zapata Hwy not being cut on a regular basis.  We've come to expect the city opening up a new animal shelter today while construction is still ongoing.  Poor customer service almost everywhere.  Lack of code enforcement.  Yadda yadda yadda.
We're not doing our image any good when people are comparing our landscape to the Dust Bowl era.