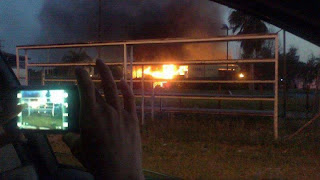 This morning I heard a loud blast right before 6 a.m.  I didn't feel the house shake and no more noises followed so I just closed my eyes again.  People have been posting comments on Facebook about hearing the blast and feeling their houses shake.

Univision has been reporting that a Mexican helicopter has been patrolling the south side of Nuevo Laredo this morning.  And they've posted a picture of a structure that was set afire (above).

Pro8news at noon reported that a bomb was detonated at a south Nuevo Laredo hotel parking lot.  Bomb threats have been called in at several locations too.  They're waiting for an official statement from authorities later today.