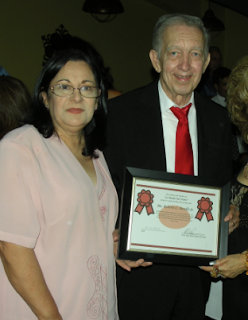 Members of the Martin High School Band Alumni Association hosted a reception for Mr. Roberto Botello this weekend to commemorate his induction into the TMEA Band Directors Hall of Fame.  Accompanied by his wife, Maria, Mr. Botello was praised for his years of dedication and the legacy he left behind.

Mr. Botello attended the University of Texas at Austin and pursued a graduate degree in Chicago.  His first job as a band director was at Lamar Middle School.  It wasn't until Vidal Trevino became LISD's superintendent that Mr. Botello's presence at Martin H.S. was requested.

Once there he was instrumental in shaping the band's image and giving the group its new byname, "La Banda del Animo."  As the name implies, their performances were filled with excitement -- So much so that they impressed an attendee at a marching competition in Austin, and from there the band got an invitation to perform at halftime during a Dallas Cowboys game.

Mr. Botello left an indelible mark on his students and the band program at Martin.  He respected those he taught, and likewise, demanded respect.  His approach was that of amiable mentor.  For someone who didn't have the pleasure of learning from him, I can appreciate the influence he had in the band world and in the community.