Dance Is A Flop 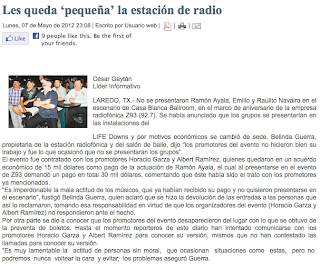 A blog reader brought to my attention what transpired at a local dance this weekend.  Apparently, Ramon Ayala was set to perform at the Casa Blanca Ballroom.  But after the opening act played, nothing happened, and the attendees grew restless.

Later somebody learned that the musicians were sitting pretty at a local watering hole watching a pay-per-view boxing match.  Awesome.

As per the Lider story (above), the promoter was prepared to pay the act(s) $15,000, but the band demanded $30,000 upon arrival.  Some people asked for their money back since they only enjoyed part of a show.  And the promoter was nowhere to be found when the shit hit the fan.  They, however, were able to make off with the pre-sale ticket money.  Que chulos.

Now I know why I'm not a concert promoter.