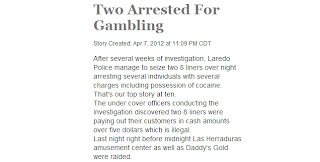 Over the weekend, Pro8news reported on a pair of 8 liner busts, one of which raised the stakes with a charge of drug possession on top of the usual gambling promotion citation.  Around $9,000 was confiscated from both establishments.

This game of cat and mouse is now commonplace in Laredo -- people get permits from the city to operate these eyesores casinos; the operators pay out cash prizes exceeding $5 per person; and the cops swoop in to seize large amounts of money that may or may not be returned to the establishments.  This whole issue amounts to city-sanctioned corruption justified because of the revenue stream it provides for Laredo.  Because of that, and because supporters of 8 liners view these establishments as a form of entertainment, harsher realities are easily overlooked.

KGBT reports on the valley's problem with 8 liners, and how the owners never seem to come up for air.

Email ThisBlogThis!Share to TwitterShare to FacebookShare to Pinterest
Labels: 8 Liners