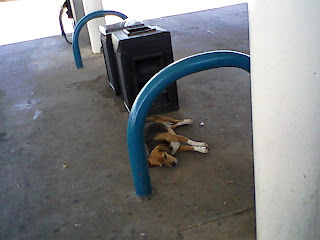 I saw this beagle taking a load off yesterday between two gasoline pumps.  I figured the heat was too much for him to bear.  As I was filling up, I noticed that he would lift his head as if he were startled.  He would look back and then lay his head down again.  A friend thought that somebody probably dumped him there, and that when he looked up, he was actually hoping to see his owner return.  Given this city's problem with strays, hopefully this dog was just out cruising the south side scene.