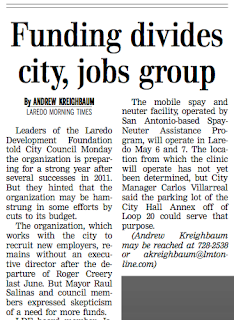 At last night's council meeting, the issue of converting the sports venue tax into a 4b funding process for economic development arose.  As it stands now, the Laredo Development Foundation gets its funding from the city's general fund.  Considering that times are tough -- a common refrain by Raul Salinas -- the organization's budget was decreased.

Councilman San Miguel asked LDF staff to compare their budget with that of comparable markets, to which an example of McAllen's practices was provided.  Apparently McAllen has the resources to make trips to South Korea to promote the valley.

But the point was lost on Juan Narvaez.  He wanted to know what became of that globetrotting gamble.  No further details were available for McAllen's ventures, and Narvaez seemingly proceeded to slay the agitator before the council.  But the joke's on him.  The fact that we look up to McAllen and continually think that they're eating our lunch is because we have to contend with people like Juan Narvaez.  He's so dense that he doesn't appreciate the notion that we could learn a thing or two from them.  And what's more surprising is that nobody calls him out on it -- not the other council members, and certainly not the clueless mayor reclining in his chair thinking about wrapping this meeting up.

In the video below, Narvaez chimes in at the 1:15 mark