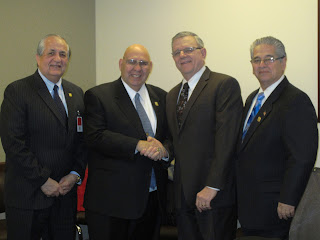 Mayor Raul G. Salinas, Council Member Johnny Rendon and City Manager Carlos Villarreal started their day meeting with Bernard Melekian, Director of the Office of Community Oriented Policing Services (COPS) for the U.S. Department of Justice.  According to the City Manager, “COPS funded 22 additional Laredo police officers in the last two years, allowing us to put more police officers on the streets. We wanted to say thank you and explore what other opportunities exist for Laredo.”   Mayor Salinas added, “Laredo has done very well with the COPS program over the years, and I was very pleased to hear that the COPS program is making funding available in its next round to hire military veterans.  Laredo is already on record with a commitment to support our returning veterans.  We are ready to compete for such funds consistent with our civil service policies.”
The Mayor also led a delegation to the U.S. Department of Transportation (DOT) to not only explore funding opportunities, but also to request the Department’s leadership to address the train issues in Laredo.  The Mayor explained, “A primary mission of myself, Mayor Pro Tem Cindy Liendo-Espinoza and Council Member Jorge Vera in coming to visit DOT is to seek an answer to the train problems we face in Laredo.  We need and want the commerce that the train brings, but we must balance that trade with the safety of the citizens of Laredo.  We will continue to pursue this issue.”
A delegation led by Mayor Pro Tem Liendo-Espinoza and Council Member Vera met with Walter Bastian, Deputy Assistant Secretary of Commerce.  Secretary Bastian shared with the delegation that when it comes to commerce centers, Laredo is a model for others to follow.  Council Member Vera noted that it is always nice to hear compliments about our city.  He added, “We are pleased to have learned that Walter will be traveling to Laredo in June as part of a fact finding mission to assist the Obama Administration develop a border strategy for economic relationships between the United States and Mexico.”
Council Members Esteban Rangel and Alex Perez led a delegation to the Environmental Protection Agency (EPA) where he learned that EPA was very impressed with the new Haynes Recreational Center, the first LEED’s certified facility in Laredo, and that EPA would like an invitation for the Regional EPA Administrator to attend the upcoming ribbon cutting ceremony.”  Council Member Rangel made clear that, “we will be issuing that invitation just as soon as we get home.”
Council Member Rendon later accompanied Fire Chief Steve Landin out to the National Oceanic and Atmospheric Administration (NOAA) offices to explore funding opportunities for a weather satellite in Laredo. And finally, the day ended with the delegation back at the Department of Commerce where Mayor Pro Tem Espinoza and Council Member Vera explored grant programs at the Economic Development Agency.
Press release courtesy of the City of Laredo
When your city is the largest inland port and McAllen is eating your lunch you have to make yearly trips to Washington to say hello to people and shake hands.  You can apply for COPS funding online, but showing your face really makes a difference.  And the more, the merrier!  (42 to be exact)

I don't know if it really takes 42 people to go say hi.  That number could be a typo, just like the estimated number of people who use our buses.

Improvements at the Lincoln-Juarez Bridge could help reach the goal of expediting border-crossing times, city officials said.  An investment in the mass transit system is needed with 42 buses moving more than 3.1 million passengers per day, they said.

I don't question our leaders' good intentions.  What I question is having to rent 42 hotel rooms when that number could be lower.  And Henry Cuellar could help in all of this.  After all, he is our main lobbyist.

I'm so happy that my councilman was able to go on this field trip.  And I hope he has a nice Spring Break next week.  I expect a full report from him and a copy of all his receipts.
I have no idea what they're referring to with that 3.1 million figure.  Is somebody inflating the numbers just to get funding?
Posted by KeyRose at 1:45 PM